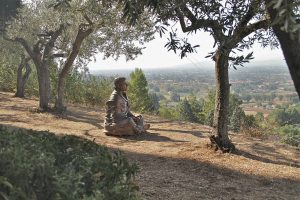 St. Francis, often called the patron saint of ecology, founded the creation-centered Franciscan Order. He is known for having received the stigmata near the end of his life – literal wounds in the palms of his hands that symbolize and commemorate the crucifixion of Jesus.

St. Francis focused on the historical, embodied Second Person of the Trinity, Jesus of Nazareth. He prayed fervently with the Gospels, and he experienced an intense imaginative identification with Jesus. Like the bride in the Song of Songs who seeks consummation with the holy Bridegroom, Francis sought to lose himself in the life of Jesus.

Francis felt that the veil of time and space between Jesus and himself was so thin that he could hear Jesus’ voice. Once, when praying with an icon of the crucified Jesus in the Assisi church of San Damiano, he heard Jesus say, “Francis, Francis, go and repair my house which, as you can see, is falling into ruins.” Francis immediately acted on this communication, selling some of his father’s goods to help repair the church. Francis also heard Jesus’ words in the Gospels as directed to him personally. Upon hearing a sermon based on Matthew 10:8-11, Francis took Jesus’ command literally: he left his family and privileged station and began living in poverty, devoting his life to the poor and the sick. Francis’ way was Jesus’s way, and in the eyes of his followers, Francis’ presence and actions coincided completely with the presence and actions of Jesus.

Francis’ I-Thou relationship with Jesus extended to all of God’s creation. His well-known composition, “The Canticle of Creation,” praises natural elements, using terms such as Brother Sun, Sister Moon, and Sister Earth, Our Mother. Francis considered all creatures to be his siblings because they shared the same Creator. St. Bonaventure, generally considered Francis’ chief biographer, wrote that Francis cultivated a sacred I-thou rapport with birds, pigs, snakes, and donkeys. St. Francis’ awareness was so fixed on Jesus of Nazareth as the Second Person of the Trinity that one could argue that he himself was transfigured into the I-Thou consciousness of Jesus.

A famous prayer attributed to St. Francis conveys his love for the Prince of Peace: